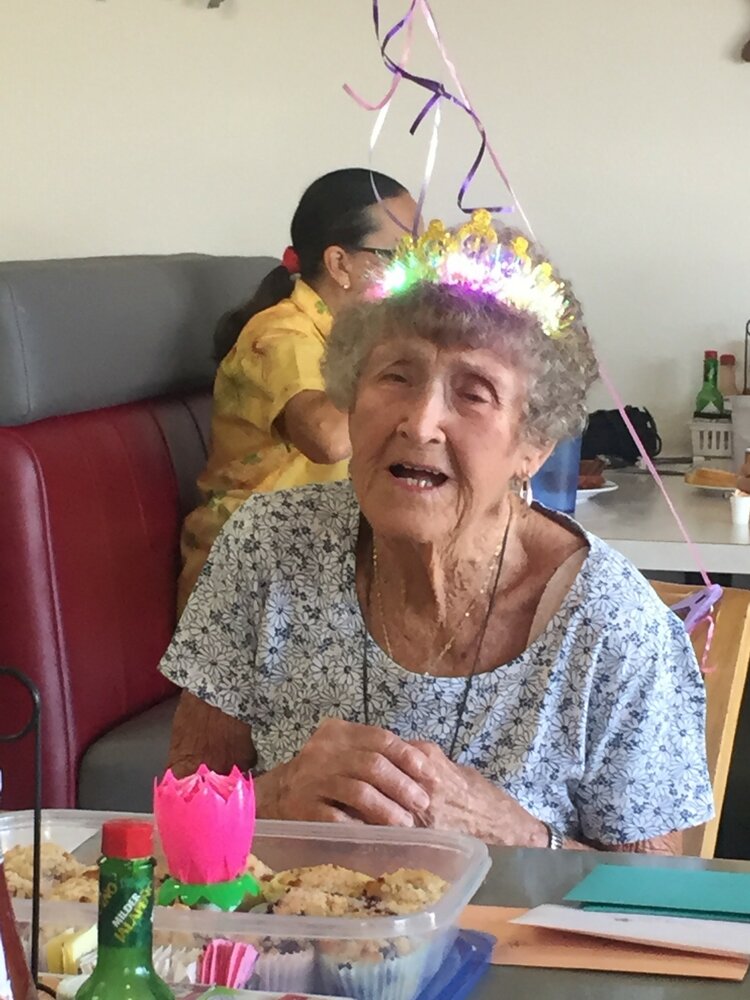 Please share a memory of Edna to include in a keepsake book for family and friends.
View Tribute Book
Edna Willett, age 93 years old, was called home by her Heavenly Father on December 27, 2022. Edna was a longtime resident of Lake Havasu City. She passed away peacefully at home, following a brief stay in the hospital, followed by hospice care. She was born to William and Violet Hall in Cincinnati, Ohio, on August 24, 1929. The family moved to Southern California, settling in the city of Puente. She met and married Richard L. Palmer and they moved to El Monte, that’s where they started their family of two sons, Dennis L. Palmer and Daryl L. Palmer. They later moved to the San Dimas / La Verne area. A few years after their move, they had a daughter, Denise L. Palmer. Edna was always busy working. For a while she and her mother owned and operated Edna’s Coffee Shop in Pomona. She worked as a waitress at the Chuckwagon Restaurant in San Dimas and later ran a food concession booth at the L.A. County Fair. Eventually, she found her way to be a Teacher’s Aide, at Bonita High School, working in Special Education. She was widowed in 1979. She continued to stay busy as she and friends held monthly yard sales, which turned into a social outing for all. In 1981 she met and married Dick Willett. Upon their retirements, they started a small business called “Willies Walkies”, which served ice cream with homemade waffle cones. They traveled and worked the county fairs and city celebrations throughout California and Arizona. During the down times they loved to RV, spending lots of time at Mountain Lakes Resort. In 1994 they moved to Lake Havasu City. She stayed busy with water aerobics, exercise classes and playing Bingo, Bunco, and Dominoes. Edna never met a stranger. She loved spending time with her friends as they enjoyed many of Havasu’s restaurants and their shopping outings, making weekly jaunts to the Hospice Store to find bargains. And of course, the occasional trip to Laughlin. She loved to bake and share cookies with all to enjoy. Edna attended New Hope Calvary Church and was active with a neighborhood bible study. Unfortunately, she was widowed a second time in 2017. She is survived by her son Dennis Palmer and his wife Randy of Lake Havasu City, Daryl Palmer and his wife Jessica of Indianapolis, IN, and her daughter Denise Palmer and her partner Rose Gonzales of Pomona, CA, step- daughter Vera and Dan Mount of Springfield, IL., step-son Michael and Libby Willett of Danville, IL., 8 grandchildren, and 5 great grandchildren. A celebration of life is planned for a later date. The family is requesting that in lieu of flowers, donations can be made to Beacon of Hope Hospice, 1760 McCulloch Blvd. N. #204, Lake Havasu City, AZ 86403 or to New Hope Calvary Church, PO Box 837, Lake Havasu, AZ 86405.
To plant a beautiful memorial tree in memory of Edna Willett, please visit our Tree Store

Look inside to read what others have shared
Family and friends are coming together online to create a special keepsake. Every memory left on the online obituary will be automatically included in this book.
View Tribute Book
Services for Edna Willett
There are no events scheduled. You can still show your support by planting a tree in memory of Edna Willett.
Plant a tree in memory of Edna