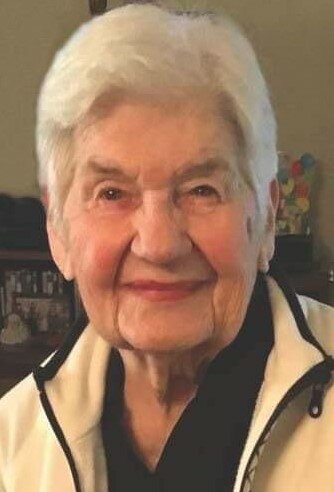 Please share a memory of Nelda to include in a keepsake book for family and friends.
View Tribute Book
Our mother, Nelda Faye Drury, died peacefully in her own bed early in the morning July 20, 2022. She was 92 years young. She was met at the Gates with open arms and a resounding “Welcome Home, good and faithful servant.” Nelda was born at home, January 24, 1930, the youngest of eight children to Annie Mae and John Robert “Bob” Barnett in Fort Worth, Texas. The family moved to Ardmore, Oklahoma when she was two years old where they resided in the same home for 32 years. Bob and Annie owned and operated Barnett Plumbing and were part owners of the minor baseball team there in Ardmore. Nelda graduated from Ardmore High School in 1948 and married Harold John “Red” Sollars, a professional baseball player and part-time plumber, in July of that same year. Nelda and Red eventually bought the Plumbing company changing the name to Sollars Plumbing, adding Sporting Goods a few years later. Nelda took on the job of running the company while Red went back to school to get his teaching degree. Nelda reported loving being married and loved being a mother. She was supportive of Red going back to college while she ran the business. Their first four daughters were born in Ardmore. The family was active in First United Methodist Church of Ardmore. They sang in the choir and attended an Adult Sunday School class. She was President of the Young Mother’s Group. She played bridge and enjoyed square dancing as well as family activities and vacations. In 1966, Red and Nelda took a McCulloch promotional flight to Lake Havasu City (the last one out of Fort Worth, TX). They bought a lot primarily as an investment. In 1967, Red and Nelda packed up their family of six and moved to Lake Havasu City. Nelda reported the 70s were fun for the family and they loved this new city on the Colorado River. She worked in the Lake Havasu City School District in various positions but primarily as a librarian. She loved to read, she loved working with the students and was able to call them by name. Red and Nelda’s youngest daughter was born in Kingman, AZ after racing the doctor from Havasu to Kingman for the delivery. ​ Nelda was an active member of United Methodist Women, Friends of the Library, P.E.O., and Arizona Association of University Women among other organizations. She continued to play bridge and was active with her family at St. Michael’s United Methodist Church. She went back to school to get her Bachelor of Science degree in Elementary Education with certification in Library Science, starting at Mohave Community College and finishing up at Northern Arizona University; ultimately getting her Masters in Elementary Education through NAU. On New Year’s Day 2002, Nelda married Gene O Drury of Lake Havasu City. They knew each other from St. Michael’s UMC where they were both active. Everyone who knew them talked about how sweet they were together. They called each other sweetheart, held hands when they walked and encouraged each other over the last 20 years. Mom and Gene were able to stay in their home with the support of Hospice of Havasu, Beacon Hospice, Meals on Wheels, and the loving caregiving of daughter Carol and son-in-law Jerry, daughter Sharon with daughter AnnaMarie and Gene’s daughter Geraldine Hartwell coming in as short- term relief. Nelda is preceded in death by her husband of 20 years, Gene O Drury and her husband of 52 years, H.J. “Red” Sollars and their daughters Janice Faye Kisselburg and Sondra Lee Lyon. She is survived by her daughters AnnaMarie Sollars (Christian and Jaze); Sharon Dee Sollars (Alexis and Juan); Carol and Jerry Nowakowski (Justen, K’Lee and Lindsay); Janice’s children Jayson (Tana) and Frances; and Sondra’s children Sarah (Jake), Rebecca (Matt), Derek (Francine), 15 great grandchildren as well as many members of the Drury family. Nelda was a devout Christian and brought her grace and faith into every aspect of her life and instilled that love into her children – instilled her love of God, her love of family, her love of community, her love of learning and her love of service. She brought grace into every situation. She was loved by all who knew her and will be missed more than words can ever say. But we know she is Home with all those who went before her – her parents, her brothers and sisters, her in- laws, two husbands, her two daughters, and her friends – they were all there waiting to greet her with open arms.
To plant a beautiful memorial tree in memory of Nelda Drury, please visit our Tree Store

Look inside to read what others have shared
Family and friends are coming together online to create a special keepsake. Every memory left on the online obituary will be automatically included in this book.
View Tribute Book
Services for Nelda Drury
There are no events scheduled. You can still show your support by planting a tree in memory of Nelda Drury.
Plant a tree in memory of Nelda