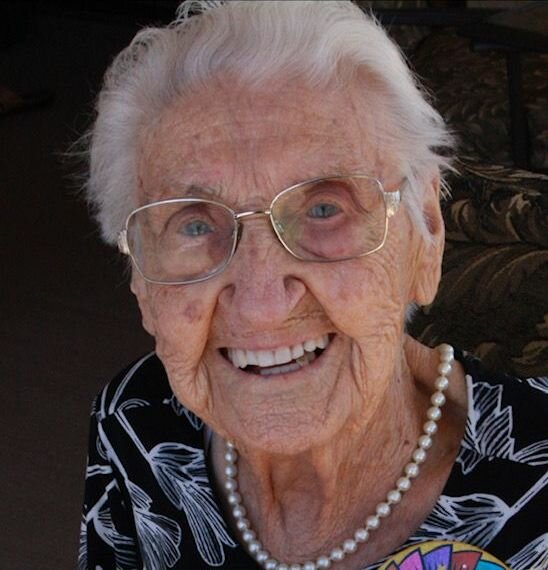 Please share a memory of Herta to include in a keepsake book for family and friends.
View Tribute Book
Herta Segers was born in Germany. She was the youngest of 7 children. In 1940, she met and married the love off her life Hans Segers, also of Germany. In 1952, they decided to immigrate to Canada to give their children a better life. In 1959, they pulled up roots and immigrated to El Segundo, CA and were very proud to become US citizens. She was employed by Continental Airlines until her retirement in 1968. She and her husband retired to Havasu Palms, where they enjoyed boating, fishing, and had fun during the many visits from their children and grandchildren. In 1988, they moved to Lake Havasu. In all those years, Herta never met a person who didn’t become a friend. Her family was her life. She attended all family events, including her great-grandchildren’s sporting and theater events, and graduations. In addition to her love of family, Herta had a passion for animals and raised $1000 for Lake Havasu Animal Shelter by asking for donations for her 100th birthday, rather than gifts. In recent years, Herta made t-shirt dog toys that she donated to the shelter, Hospice Store of Havasu, The Veterans Thrift Store, and The Make-A-Wish Foundation, for their fundraiser, and also for anyone else that wanted one. She also donated to the Cumberland County Animal Shelter while on vacation last summer in Tennessee. Herta is preceded in death by her husband, Hans, son-in-law; Ralph Bruckner, and grandson-in-law; David Radine. She is survived by her three children; daughter, Ursula(Billie) Bruckner of Lake Havasu City; son, Dutch Segers(wife Linda) of Fayetteville, GA; son, Pete Segers(wife Gale) of Crossville, TN; granddaughters, Lori Radine, Debbie Rosales(husband Mark), and Jamie Parish; grandsons, Kelly Segers(wife April), and Robert Segers(wife Susan); and great-grandchildren, Kyle Rosales, Damian Radine, Madison Radine, Devon Radine, Ryan Segers, And Mattie Parish. Herta’s favorite saying was “Always treat others as you would have them treat you” and would lovingly tell you that you were “one in a million”. Mom, Oma, and Uroma, known to her family, will be missed terriby by those who loved her the most and are thankful to have had her so long.
To plant a beautiful memorial tree in memory of Herta Segers, please visit our Tree Store

Look inside to read what others have shared
Family and friends are coming together online to create a special keepsake. Every memory left on the online obituary will be automatically included in this book.
View Tribute Book
Services for Herta Segers
There are no events scheduled. You can still show your support by planting a tree in memory of Herta Segers.
Plant a tree in memory of Herta