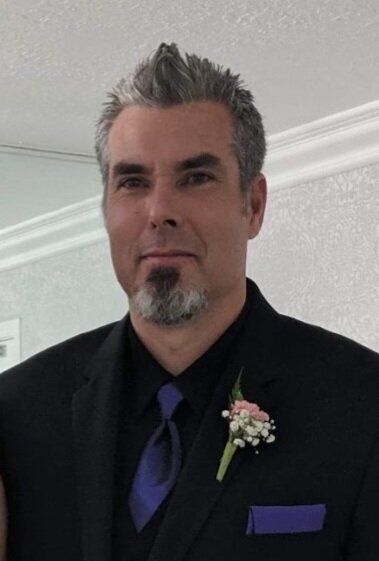 Please share a memory of Michael to include in a keepsake book for family and friends.
View Tribute Book
Michael (Mike) graduated from Fountain Valley High School in 1994. Michael was currently employed at Van Rooy Plumbing where his coworkers loved him and his sense of humor. Michael married his love of 9 years, Alexandra Rudy in a quaint little chapel in Las Vegas with close friends and family in attendance on 12/31/2019. Michael loved to collect old classic cars, enjoyed fixing them up and bringing them back to life again. He enjoyed camping and outdoor activities and he also loved music and would enjoy concerts with his friends that he considered his brothers. Michael loved his four-legged friends very much. He was always caring for his animals, mostly his dogs, and when Michael was called Home, Havoc was waiting for him. Michael was born in Anaheim, CA where he spent a number of years until he moved to Arizona in 2004 and then ultimately settled in Lake Havasu City in 2018 with his wife Alexandra. Michael is survived by his parents Bob and Starr Trembinski and Linda and Richard Winter. His sister and brother-in-law Rachael and Eric Rivas, his nephews Aiden and Christian Rivas and his mother and father-in-law Sharon and Lance Rudy. Michael was a quiet soul and had a shyness about him until you would bring up his favorite topics, then he could go on and on. He was kind and carefree and would do anything to help anyone out. Michael had an uncanny sense of humor that only his closest family and friends could understand. He had the gift of making friends everywhere he went. Michael was a wonderful son, brother, husband, son-in-law, uncle and friend. Michael was a Christian and he was baptized in a Lutheran church when he was very young. Michael was a donor and there is no surprise to know that even after being called Home, he could help other families in their time of need. Michael lives on through so many and is missed every second of every minute of every day. Michael’s celebration of life is on Saturday, November 5 at 3:00pm at the Quality Inn at 271 Lake Havasu Ave, Lake Havasu City, AZ 86403. Services were entrusted to the care of Lietz-Fraze Funeral Home. Thoughts and condolences can be sent to the family at www.lietz-frazefuneralhome.com. To send a free card go to www.sendoutcards.com/lietzfraze .
To send flowers to the family or plant a tree in memory of Michael Trembinski, please visit Tribute Store
Saturday
5
November