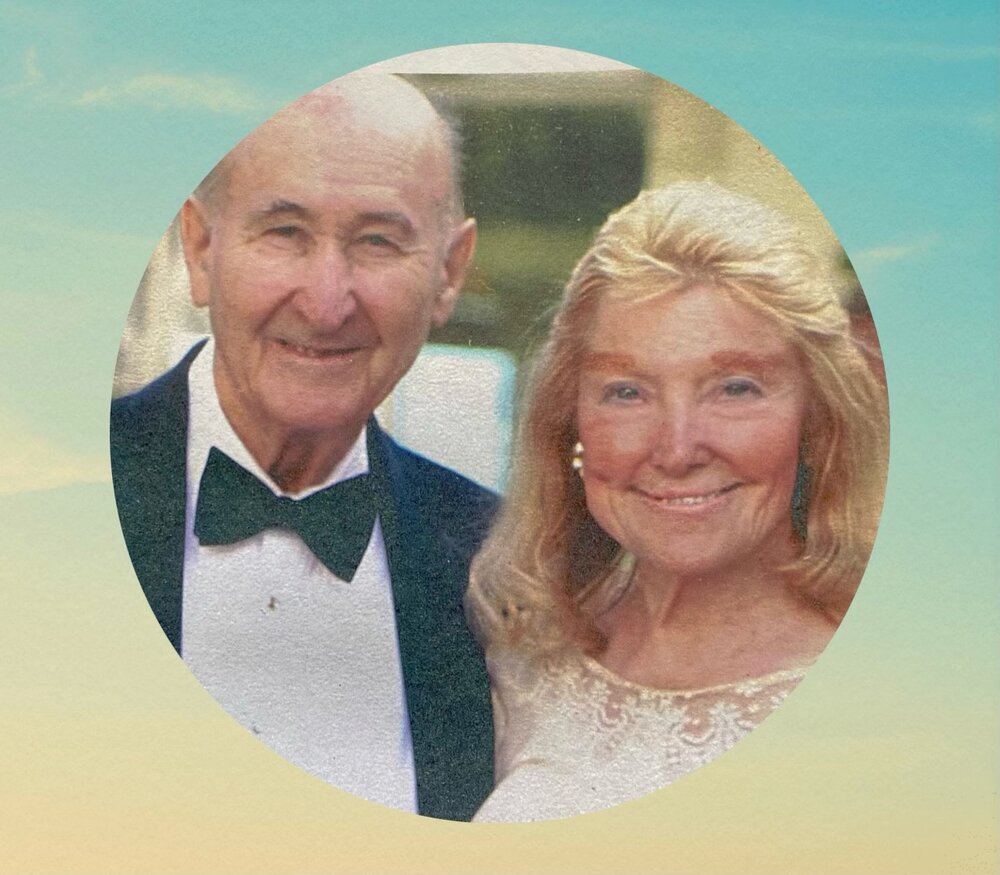 Please share a memory of Iris to include in a keepsake book for family and friends.
View Tribute Book
A story of true love, Philip and Iris Mehan of Redondo Beach, CA celebrated their 60th wedding anniversary June 15th. On August 15th Philip and Iris both passed peacefully at home, Philip at 1 AM and Iris at 9 PM. Philip would have been 98 years old on September 19th. They both lived healthy active lives. Neither complained unless they weren’t by each other’s side holding hands. Philip is survived by daughter Leslie, grandchildren Mark, Kerstin and Nicole, one great-grand-daughter and five great-grandsons. His daughter, Stephanie, predeceased him. Iris is survived by son Craig and wife, Leah. Both Philip and Iris were close to their nieces and nephews. Leah, a nurse, graciously and professionally took loving care of them in their final months helping them fulfill their wish to remain at home in a loving environment together holding hands until their final hours. Philip’s formative years were spent in Big Creek, CA and, when the family moved to Gardena, he attended High School and then Palos Verdes College. He enlisted in the Merchant Marines, graduated from Officer Cadet School and, in WW2, captained ships carrying sailors from CA to the Philippines as well as other destinations in Asia. He survived typhoons in the South China Sea, made a daring escape from the Manila prison and authored a book, Red Sky in the Morning, about these memories. In the early 1950’s Phil was a pillar and growth catalyst to the beginnings of the South Bay Hollywood Riviera. He and his brother, Ralph, owned the Mobile gas station in the Riviera Village. Phil and his dad built one of the first Riviera homes and he established his real estate office there as well. Iris spent her formative years near Edmonton, Canada on the family ranch. She reigned as the “Ice Carnival Queen” for six years and, at age 12, she knew she wanted to pursue fashion and design. Later, she moved to NYC and modeled for the Ford Modeling Agency. Philip, as real estate agent, met the love of his life when she moved to the South Bay to buy a home. They fell in love, married, bought and flipped houses together, and eventually went into commercial real estate sales. In 1972 they bought land and developed Tulare’s first major shopping center, Tulare Town and Country Village, “their baby”. They actively ran the center until their passing. They loved where they lived and enjoyed walks on the beach and along the Esplanade. Philip bodysurfed Torrance Beach until his mid 80’s. They enjoyed dancing with their friends and family at the Elks Club, hosting glamorous parties and just sitting at home together holding hands listening to Hawaiian or gospel music in “their happiest place”. They are a testimony of true love, friendship and growing together as one entity.
To plant a beautiful memorial tree in memory of Iris Mehan, please visit our Tree Store

Look inside to read what others have shared
Family and friends are coming together online to create a special keepsake. Every memory left on the online obituary will be automatically included in this book.
View Tribute Book
Services for Iris Mehan
There are no events scheduled. You can still show your support by planting a tree in memory of Iris Mehan.
Plant a tree in memory of Iris