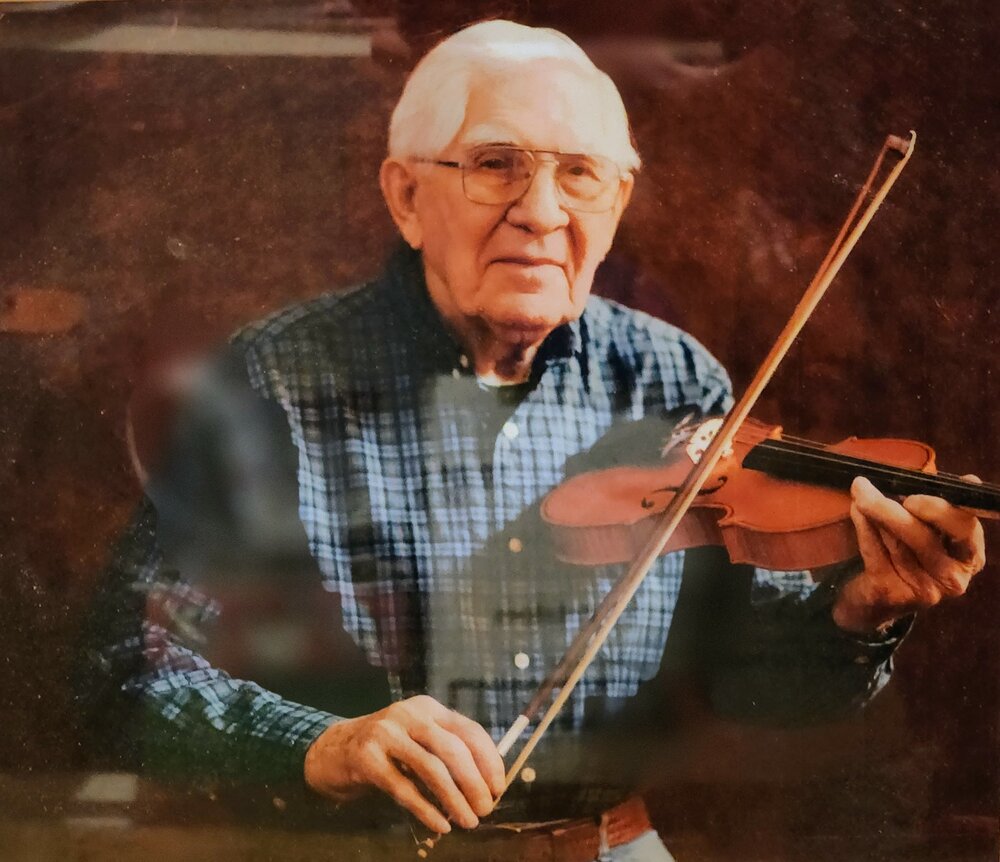 Please share a memory of Gene to include in a keepsake book for family and friends.
View Tribute Book
Gene Osmon Drury, 102, of Lake Havasu City, AZ, passed away peacefully on May 8, 2022 at his home surrounded by family and friends. He was born September, 23, 1919 in Plainville, IN., the son of Ralph and Bonnie Drury. He was preceded in death by first wife Lydia Reid, January 1997 of 54 years, his elder brother Ralph Drury in April 2020, also at the age of 102, and his younger brother Charles Calloway in 2009. He is survived by his two paternal daughters Elizabeth “Gerri” Hartwell and Barbara Pecor. Five grandchildren and great grandchildren, Robert and Sandra Cathey (Madison and Mackenzie), Angie Suttles (Donnie, Breanna, and Dylan), Kelly Blankenship, Justin Blankenship, and Lydia and CJ Truell (Cory III) and seven great, great grandchildren. He is also survived by his lovely second wife of 20 years Nelda Sollars and her daughters Anna Marie Sollars (Christian and Jaze), Sharon Sollars (Alexis and Juan), and Carol and Jerry Nowakowski (Justen and K’Lee). Gene graduated from Ranken Technical College in 1940, following graduation, he worked at Curtis Wright Aircraft until 1942 until he was drafted into the U.S. Navy during WWII and served as a machinist first class, stationed in Pearl Harbor, HI. After the war, he returned to Curtis Wright and married Lydia, and they settled in St. Louis, Missouri raising their daughters, Elizabeth “Gerri” and Barbara. In 1948, he was employed at McDonnel Douglas for 29 years until his retirement in 1977. Also, he was a loyal member and Grand Master of the Masonic Palestine Lodge #241. During his retirement, Gene and Lydia settled in Lake Havasu City, AZ and he continued his passion of working with his hands and mind, beginning his journey of making violins, 212 in total. He enjoyed donating the instruments to various musicians and local area orchestras, most prominently the String Ambassadors of the Yuma Strings Orchestra. His other passions included visiting with his family, traveling, and attending his beloved St. Michael’s United Methodist Church which he was a key member for over forty years. A celebration of life will take place Monday, May 16th at 2PM, St. Michael’s United Methodist Church 2895 Jamaica Blvd S Lake Havasu City, AZ 86406 . In lieu of flowers, the family requests donations to the St. Michael’s United Methodist Church 2895 Jamaica Blvd S Lake Havasu City, AZ 86406 or the Yuma Strings c/o Janet Jones 3644 W Brandi Lane Yuma, AZ 85364.
To send flowers to the family or plant a tree in memory of Gene Drury, please visit Tribute Store
Monday
16
May