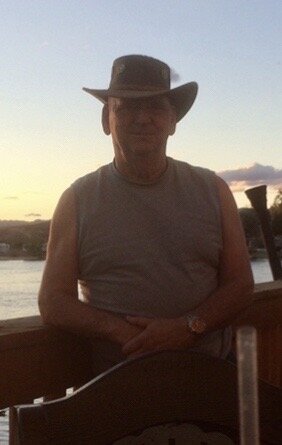 Please share a memory of James to include in a keepsake book for family and friends.
View Tribute Book
James(Seagull)Alvin Stuart Born May 5,1946 in San Francisco CA to Alvin and Marie Stuart. Jim passed away on May 4,2022 with his loving wife Bunnie Stuart by his side in Lake Havasu Arizona. Jim was a twin to John Stuart. He was a US Navy Veteran and then went to work for United Airlines til he retired. He then lived a short time in Happy Valley Ca where both him and his wife Bunnie were Volunteers for the Citizen Patrol. After that they took to traveling life where they traveled with-their dogs in their fifth wheel. Jim is proceeded in death by his Father Alvin Stuart , His mother Marie Stuart, his brother John Stuart and his daughter Susan Dial. Jim leaves behind his wife Bunnie Stuart, His sons William Stuart (Tammy Watson) and Jim (Christina )Stuart and his daughter Danielle (John )Restuchi. His son in law Mark Dial. He has 15 grandchildren and 15 great grandchildren. 2 Nieces 3 great nieces and one great nephew. He will be missed by all.
To plant a beautiful memorial tree in memory of James Stuart, please visit our Tree Store

Look inside to read what others have shared
Family and friends are coming together online to create a special keepsake. Every memory left on the online obituary will be automatically included in this book.
View Tribute Book
Services for James Stuart
There are no events scheduled. You can still show your support by planting a tree in memory of James Stuart.
Plant a tree in memory of James