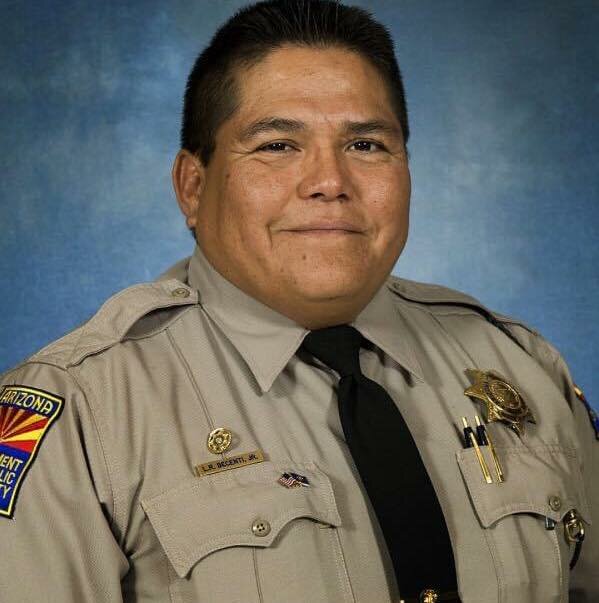 Please share a memory of Leo to include in a keepsake book for family and friends.
View Tribute Book
Leo Russell Becenti Jr, 54, passed away March 9, 2022 in Kingman, Arizona. He was born to Leo Sr and Ella Becenti on September 26, 1967 in Oakland, California. That is when the love for the Raiders began. He grew up in Table Mesa, New Mexico and then attended Shiprock High School, in Shiprock, New Mexico, where he graduated in 1985. During high school he met the love of his life Sara Lee. These high school sweethearts were married on August 8, 1987, just shortly before he enlisted in the United States Marines and they welcomed their two sons Leo and Lionel into their lives. Leo was a Desert Storm Veteran. During his time in the service, they lived at Camp Pendleton and in Mare Island, California. Upon discharge, they made the move to Kingman, Arizona, which they have called home ever since. Leo started his law enforcement career in Kingman for the Kingman Police Department, working for them for 4 years. He then made the move to the Arizona Department of Public Safety, which he proudly served for the past 23 years as a Sergeant. Leo loved spending time with his family. He enjoyed grilling, shooting, playing blackjack and especially socializing at the Kingman Elks Lodge. He was passionate and friendly to all people he encountered. He would stop, talk and has been known to feed anyone he saw in need. There were truly no strangers to him. He was a member of the Navajo Tribe; Kingman Elks Lodge #468; Fraternal Order of Police and Arizona Highway Patrol Association. Leo is survived by his loving wife Sara Becenti; parents Leo Sr. and Ella Becenti; sons Leo Becenti III (Kaydee) and Lionel Becenti; brother Darryl Becenti (Ronica); sisters Brenda Becenti-Trevino (Jesse) and Lisa Becenti (Wilbert); granddaughter Kaycee Becenti and his 5 fur babies. Leo was preceded in death by his grandparents Chester and Alice T. Francisco and Lucy Barber. A Funeral Service will be held at Kingman Academy of Learning High School Gymnasium, 3420 Burbank St, Kingman, Arizona at 9:00 a.m., on March 19, 2022. Graveside will follow at 11:00 a.m., to be held at Mountain View Cemetery, 1301 Stockton Hill Rd, Kingman, Arizona. There will also be a Celebration of Life at the Kingman Elks Lodge, at 2:00 p.m., 900 Gates Ave, Kingman, Arizona. Donations can be sent through Zelle to Kaydee Becenti at kaydeewlee@gmail.com Services were entrusted to the care of Lietz Fraze Funeral Home. Thoughts and condolences can be sent to the family at www.lietz-frazefuneralhome.com. To send a FREE card to the family, go to www.sendoutcards.com/lietzfraze Funeral Service LIVE STREAMING of service can be found at https://www.viewlogies.net/lietz-fraze/dUlY2e4Oh?pin=092409, then use pin# 092-409 and click Leo Becenti Private Broadcast.
To send flowers to the family or plant a tree in memory of Leo Becenti Jr, please visit Tribute Store
Saturday
19
March

Share Your Memory of
Leo
Upload Your Memory View All Memories
Be the first to upload a memory!
Share A Memory
Send Flowers
Plant a Tree