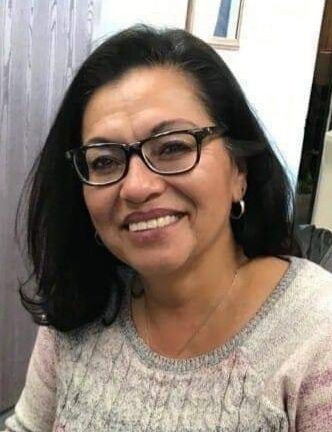 Please share a memory of Eliza to include in a keepsake book for family and friends.
View Tribute Book
Eliza C. Herberg, age 59, passed away on November 4, 2021. She was born on July 5, 1962, in Orange County, California, to Pete and Rosie Castellon. Eliza attended Valencia High School and Rio Salado College. She lived in Tolleson, AZ, then moved to San Dimas, California. She worked as an operations coordinator at Stack Wall Manufacturing starting on June 7, 2020. She worked formerly as an office administrator at Skyce Steel Inc. from February 7, 2015, to October of 2017. She enjoyed praising the Lord, baking, and watching Hallmark movies. She loved shoes, coffee, and spending time with her grandkids. She had the biggest heart and a beautiful smile. She was a giving person who always put others before herself. Eliza is survived by her son, Ceaser Galvez of Buena Park, California; her daughters, Erica Cota, Sylvia Castellon, and Melissa Cota of Lake Havasu City, Arizona; her sister, Cynthia Castellon of California; eight grandchildren, as well as her pets, Xena and Blondie. Eliza was preceded in death by her parents. A memorial service will be held at Lietz-Fraze Funeral Home, 21 Riviera Blvd., Lake Havasu City, AZ 86403, on January 8, 2022, starting at 11:00 am. Arrangements were placed into the care of Lietz-Fraze Funeral Home.
To send flowers to the family or plant a tree in memory of Eliza Herberg, please visit Tribute Store
Saturday
8
January