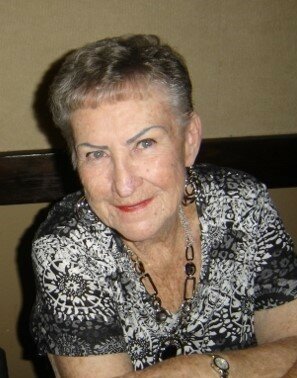 Please share a memory of Margaret to include in a keepsake book for family and friends.
View Tribute Book
Margaret Edith (Marge) Koci died December 9, 2021, at Lake Havasu Medical Center. She was born August 18, 1937, in Culver City, California. She was the daughter of Walter and Margaret Scott of Culver City. Marge graduated from Washington General High School. Marge married her high school sweetheart, Richard Emil Koci, on July 8, 1958. They celebrated their 63rd anniversary in July. She and Rich lived in southern California until they moved to Lake Havasu in May 1995. Marge and her husband Rich were involved with boy scouts for 20 years. She had a love for animals including dogs, cats, tortoises, mice, and snakes. Rich said, “Anything that moved.” Rich and Marge loved traveling, went on 24 different cruises, and enjoyed learning about places and people. When Marge moved to Lake Havasu, she became involved with many clubs and organizations including Western Welcome, Red Hats, Catholic Daughters, Elks, Republican Women, Soroptimist, Hummingbird Society, and the Lake Havasu Yacht Club. Her service helped to give money back to the community. Marge loved this city and was an avid reader. She could be reading two or three books in any one day. Marge was full of life and loved people. She was always willing to help when needed. When she ran the BUNCOS, she was known as “Marge the Sarge,” and people would listen. She will be missed by many people in this community. Marge is survived by her beloved husband, Richard; her son, Christopher of California; and her two granddaughters, Madison from Texas and Mallory from New Hampshire. She also cared for foster children in her life. A service of remembrance will be held at 10 a.m., Wednesday, December 29, 2021, at Lietz-Fraze Funeral Home, 21 Riviera Blvd, Lake Havasu, AZ. A small reception will be held at the Lake Havasu Yacht Club at 12:30 p.m. on the same day. Donations in Marge’s Memory to the “Western Arizona Humane Society” are welcomed. 2610 Sweetwater Ave, Lake Havasu, AZ 96406 Arrangements were placed into the care of Lietz-Fraze Funeral Home.
To send flowers to the family or plant a tree in memory of Margaret Koci, please visit Tribute Store
Wednesday
29
December