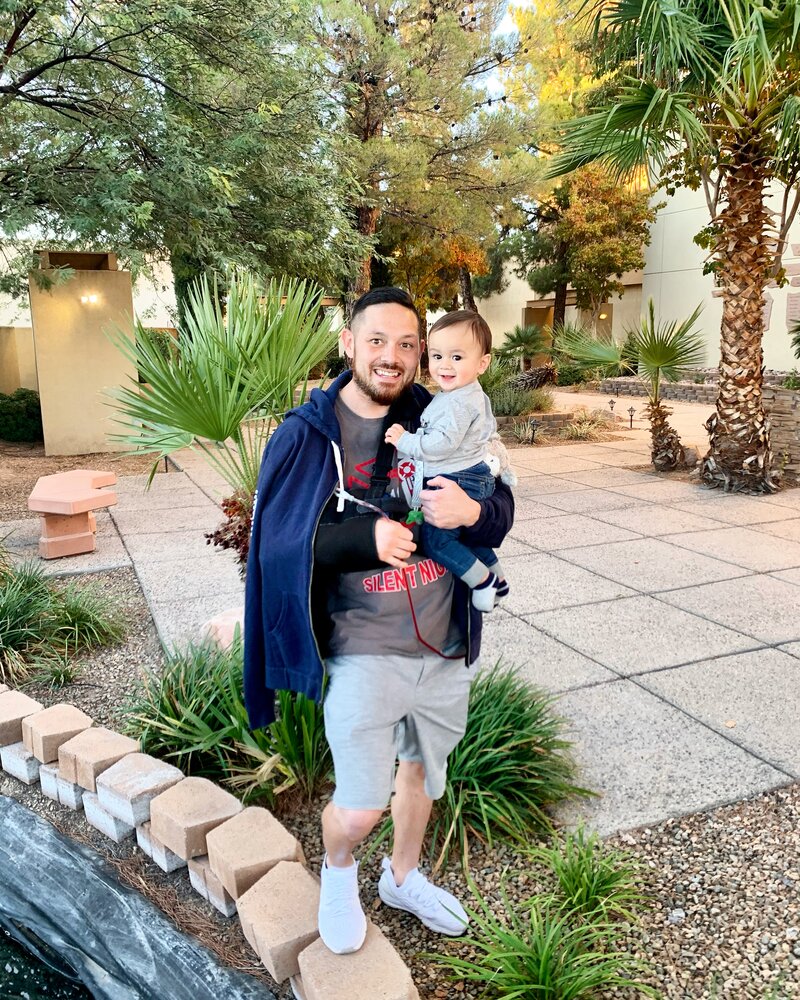 Please share a memory of Glenn to include in a keepsake book for family and friends.
View Tribute Book
Glenn Gordon Douglas of Kingman, Arizona passed away unexpectedly on November 27, 2021, at the young age of 33. Glenn was born on December 23, 1987, in Spartanburg, South Carolina to Steven and Jae Douglas. Glenn was an outstanding athlete, proudly lettering as a Varsity Kingman Bulldog in both football and track and field. It was there, at Kingman High School, where Glenn created lifelong friendships with; Niels, Steven, Dirt, Frankie, Nickhead and Duh and met the future love of his life, Alex Williams. It wasn’t until many years later that the two of them would reconnect. Meanwhile, Glenn graduated from KHS and enlisted into the U.S. Army where he served the next 8 1/2 years, achieving the rank of Sergeant. Shortly after serving in the U.S. Army, Glenn returned home to Kingman, Arizona and reconnected with his fiancé, Alex. Glenn was a devoted fiancé and found happiness in planning his wedding that was due in the summer of 2022. Most of all, Glenn loved nothing more than being a father. On January 11, 2021, he became a father to his adoring baby boy, Brixxon Krew Douglas. From that day on, the two were inseparable. Brixxon brought light to Glenn’s life; “For this child I prayed and the Lord has granted the desires of my heart.” -1 Samuel 1:27. Glenn is survived by his fiancé, Alex Williams, and son, Brixxon Douglas, his in-laws; Porter and Roxanne Williams, Cody, Kyra and Tinley Nutt, and Austin and Toria Tomlinson. He is also survived by his brother Jae Douglas (Mercedes), sisters Michelle Douglas (Matt), Yvonne Acuna (Jose) and many nieces and nephews. Glenn is preceded in death by his father Steven Douglas. Arrangements were placed in the care of Lietz-Fraze Funeral Home and Crematory. Thoughts and condolences may be submitted to the family at www.lietz-frazefuneralhome.com To send a FREE card to the family go to www.sendoutcards/lietzfraze “There are some who bring a light so great to the world, that even after they have gone, the light remains” -Anonymous Services will be held on December 18th at 11am at Hope City Church 1850 Gates Ave. Kingman, AZ 86401 A celebration of life will follow at Black Bridge Brewery at 1pm. Flowers may be delivered to Hope City Church.
To send flowers to the family or plant a tree in memory of Glenn Douglas, please visit Tribute Store
Saturday
18
December

Share Your Memory of
Glenn
Upload Your Memory View All Memories
Be the first to upload a memory!
Share A Memory
Send Flowers
Plant a Tree