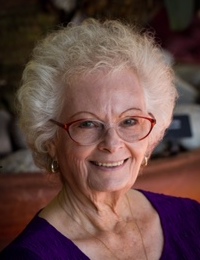 Obituary of Brenda A. Martin

Please share a memory of Brenda to include in a keepsake book for family and friends.
View Tribute Book
Brenda Ann Martin passed away in Lake Havasu City, Arizona, on Tuesday, October 26, 2021, after a long battle with Alzheimer’s disease. Brenda was born on May 28, 1939, in Loveland, Colorado to Marion and Helena Manifold. She grew up in Loveland, attending primary school and Loveland High School. It was in high school where she met the love of her life, Bob Martin. After a tour in the Navy, Bob returned, and a whirlwind romance ensued. Brenda and Bob ran off to Las Vegas and were married on October 10, 1959. The newlyweds headed off to California, where Brenda worked in retail, and their family grew. Brenda and Bob eventually settled in Flagstaff, Arizona, where they raised their four children, Debbie, Pam, Kevin & Scott. The family enjoyed hiking, camping and the beauty of the Arizona mountains. It was in Flagstaff where Brenda had her long career at K-Mart. She and Bob were very involved in the Nazarene Church and made many lifelong friends there. In 2001 they retired to the easy life in Lake Havasu City, where their oldest son Kevin and sister Sharon lived with their families. They continued to make friends and live life to the fullest. Brenda enjoyed reading, going to Bible Study, and singing in the choir. But above all, Brenda loved spending time with her children, grandchildren, and extended family. Weekends and holidays were always filled with family adventure whether getting together for dinner, enjoying the outdoors, or exploring new places. She was always happiest when her family was around her. A memorial service is being planned for early summer in Flagstaff, Arizona where she lived for much of her life. Brenda is survived by her children; Pam (Douglas) Hare, Kevin (Melissa) Martin, Scott (Paula) Martin; brother-in-law Dan Gonsalves; seven grandchildren, numerous great-grandchildren, nieces, nephews, and many good friends. Arrangements were placed in the care of Lietz-Fraze Funeral Home and Crematory. Thoughts and condolences may be submitted to the family at www.lietz-frazefuneralhome.com
To plant a beautiful memorial tree in memory of Brenda Martin, please visit our Tree Store

A memorial service is being planned for early summer in Flagstaff, Arizona