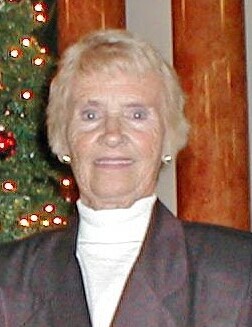 Please share a memory of Barbara to include in a keepsake book for family and friends.
View Tribute Book
Barbara Ann Beimer, "Bobbie," age 97, passed away peacefully September 26th, 2021. She was born April 30th, 1924, in Rochester, Minnesota, to Earle and Wilmina Phillips. Bobbie was a Seaman First Class in the Navy during World War II. She earned her associate's degree at Hamlin University in Minnesota. She worked as a school librarian for the school district in Oceanside, California until retirement. Bobbie married her beloved husband, Eugene Beimer, in Detroit Lakes, Minnesota on June 19th, 1947. After their wedding, they moved into their first home in Nome, Alaska in August of 1947. They lived many years in Oceanside, California. After retirement in 1986, they moved and built their home in Lake Havasu. Bobbie was a member of Lake Havasu Tennis Club. She enjoyed tennis and walking. Bobbie competed in the Senior Olympics for over thirty years. Bobbie was preceded in death by her parents; Earle and Wilmina Phillips; her twin sister, Patricia Bownen; and her husband, Eugene Beimer. She is survived by her son, Criss Beimer, Chico, CA; her daughter, Patricia Beimer, Lake Havasu City, AZ; her three grandchildren, and her 5 great grandchildren. Bobbie took pride in serving her country in World War II. Her resting place will be Riverside National Veterans Cemetery along with her husband, Eugene. Thoughts and condolences may be submitted to the family at www.lietz-frazefuneralhome.com. To send a FREE card to the family go to www.sendoutcards/lietzfraze.
To send flowers to the family or plant a tree in memory of Barbara Beimer, please visit Tribute Store
Wednesday
1
December