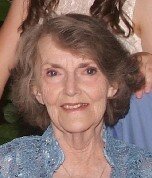 Please share a memory of Lorraine to include in a keepsake book for family and friends.
View Tribute Book
Betty Lorraine Sattler, 84 of Lake Havasu City passed away at home peacefully with her four children by her side. She was born in Miami, Florida to Taimi E. and John R. Mattson. She grew up in the Bronx, New York, where she met the love of her life, Yost Sattler and they married April 8, 1956. Lorraine worked at the United States Supreme Court in Washington D.C. before shifting careers to being a mother. Lorraine and Yost had five children, Mark, Linda, Lori, Chris and Andrew. They raised them in Commack on Long Island, New York. In 1974 Lorraine and Yost brought their family out West to Lake Havasu. In Lorraine’s busy years of raising a family, she enjoyed bowling with Yost and her kids. She also enjoyed reading, crossword puzzles, traveling and building puzzles. She loved lilacs and hummingbirds. In Lorraine’s later years, she enjoyed spending time with her children, grandchildren and great grandchildren. She also enjoyed visits from her furry friends Bear and Maui. Lorraine was preceded in death by her parents, son Mark, her Husband Yost and her brother Bobby. She is survived by her sister Linda of Long Island New York, Children, Linda Whitt (Jamey) and Chris Sattler of Lake Havasu, Lori Radke (Wayne) and Andrew Sattler of Flagstaff. Lorraine had five grandchildren, Jonathan, Kenneth and Amanda Radke and Cameron and Sierra Whitt. She also had four great Grandchildren, Remi and Kiah Radke and Eleanore and Henry Radke. Arrangements were placed in the care of Leitz-Fraze Funeral Home. Lorraine’s wishes were no services, but to return to New York to be laid to rest with her husband. Our family would like to give a special thank you to Alternate Solutions and Beacon of Hope (Hospice) for their loving care given to our Mother during such difficult times. We will miss you Mom. Arrangements were placed in the care of Lietz-Fraze Funeral Home and Crematory. Thoughts and condolences may be submitted to the family at www.lietz-frazefuneralhome.com To send a FREE card to the family go to www.sendoutcards/lietzfraze
To plant a beautiful memorial tree in memory of Lorraine Sattler, please visit our Tree Store