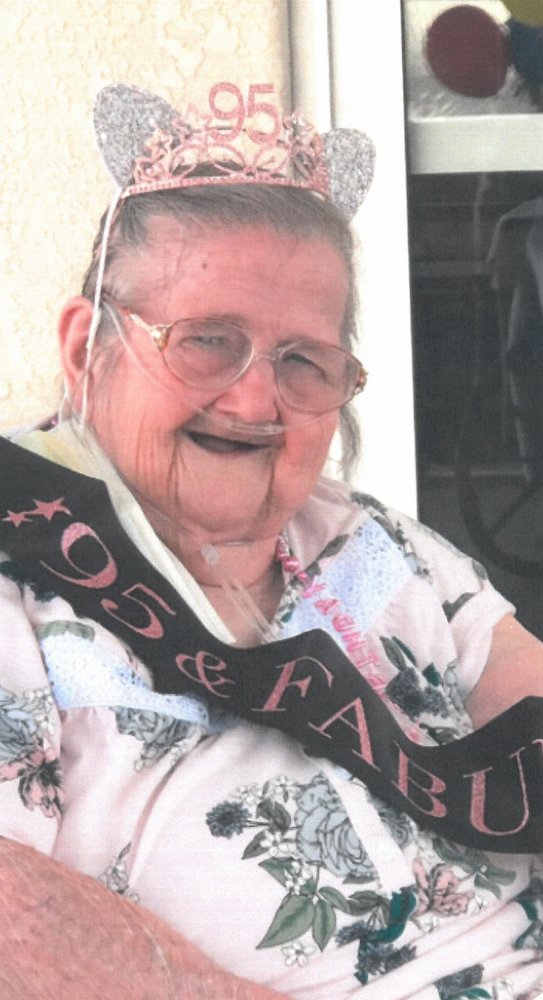 Viola Anita Vaughn September 19, 1925 – March 28, 2021 Viola Anita Vaughn, known as Betty, passed away peacefully on March 28, 2021 in Lake Havasu City, AZ. Betty was born on September 19, 1925 in Copenhagen, Denmark. Betty was a resident of Lake Hills Inn, now called Haven Health/Lake Havasu for over 20 years where she was lovingly called Betty Boop. Betty’s parents were Karl and Vera Paulsen immigrated to the US from Copenhagen, Demark. Betty was raised by Rita and Charlie Harmsen In Brooklyn NY. Betty married the love of her life Dewey Vaughn in 1948 in California. Dewey was an engineer for the U.S. Government. He worked in the Oil fields in Saudi Arabia and on the Alaskan Pipeline. They relocated to Las Vegas, NV for many years. Throughout her life Betty was devoted to animals, particularly those without homes and she was active as a rescue volunteer and animal caregiver. But mostly she loved Children. At Christmas in 2010 during a church visit to Lake Hills Inn Nursing facility, Ed and Laura Thor found Betty and soon became her new ‘Adopted Havasu Family’. The best part of the new Family was Betty became attached to all their children and Grandchildren. Betty loved them from the moment she first saw them. They would all dress-up for every holiday and preform skits and sing for Betty and the other residents. Perry was the one grandchild she knew the longest and he was her favorite. We brought 2 babies to her during those 10 years. Betty would love to hold them. Betty is survived by her Goddaughter, Sonja Jones, and Bryan Russell. Her Havasu Family, Ed and Laura Thor, Chris, Sarah, Perry, Addie, and Danny Aldridge. And all the Thor’s Children and Grandchildren from Texas and California and Colorado. Plus, the wonderful staff/family at Haven Health. Betty was a strong Christian woman who believed in God and fought off Covid 2 times. A memorial service will be held on Friday April 9 at 4:30pm at Lietz-Fraze, 21 Rivera Blvd. Lake Havasu. Services were entrusted to the care of Lietz-Fraze Funeral Home in Lake Havasu City, Arizona. Thoughts and condolences can be sent to the family at www.lietz-frazefuneralhome.com. To send a free card go to www.sendoutcards.com/lietzfraze.
To send flowers to the family or plant a tree in memory of Viola Vaughn, please visit Tribute Store
Friday
9
April