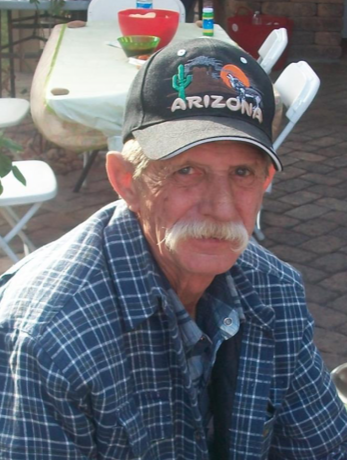 Ernest “Jack” Jones, 75, passed away peacefully on March 20th, 2021 Jack, as he was known to all, was the son of the late Jack and Alice Jones, he was born on May 9th, 1945 in Morenci, Arizona. The family moved to Southern California when he was young; spending most of his life in California he graduated from Eisenhower high school, in Rialto California, and during those teen years he found a love for working on cars, with his brothers and cousins. He joined the U.S. Navy in 1964 and served proudly on the USS Constellation as a tailor to the officers, until 1967 where he was honorably discharged. Jack turned his love of all things mechanical into a career that spanned nearly 60 years; from operating wrecking yards to being the go-to guy in machine shops. He moved to Lake Havasu City, AZ in 1995 to be closer to his grandkids. He found himself at home working again in a machine shop with Mike and Vickie Dawson, the owners of JD Machine, until he stubbornly retired in 2019. Jack’s friendly nature and love of conversation along with his vast knowledge of the industry made him well known, and liked and sorely missed in that industry. Personally he was a simple guy who loved a good meal, a cold beer, a tight hug and a silly “dad” joke to make his day. His sweet nature and kind heart was always open to help and do anything for anyone. Jack’s genuine love for his family and friends will forever be remembered and cherished by his children: Jennifer, his loving daughter of Lake Havasu City, Arizona. His devoted sons Jeff (Dee) of Salt Lake City, Utah and Jonny, also of Lake Havasu City, AZ. His brother Gene (Deena) of El Dorado Arkansas, his late brother Danny’s family of Alexandria, Louisiana. His four grandchildren: Scott, Magen, Chase (Jennifer) and Kandis, (Jeff) and his four great grandchildren: Calvin (Scott) Jack (Magen) Brydon and Casen (Kandis). So many sisters and brothers-in-law, nieces, nephews and cousins. The Harrison family, the Grayson family, and everyone who had the pleasure to meet and know him. Thank you for touching our lives the way you did Jack; may you Rest In Peace. A celebration of life will be held April 10, 2021 at the American Legion 181 Paseo Del Sol Lake Havasu City, AZ 86403. At 12:30pm with color guard ceremony promptly at 1pm. A casual affair with light snacks will be provided A no host bar will be available. Please RSVP: Jenn 928-230-2661. Services were entrusted to the care of Lietz-Fraze Funeral Home. Thoughts and condolences can be sent to the family at www.lietz-frazefuneralhome.com. To send a free card go to www.sendoutcards.com/lietzfraze.
To plant a tree in memory of Jack Jones, please visit Tribute Store
Services for Jack Jones
There are no events scheduled. You can still show your support by planting a tree in memory of Jack Jones.
Visit the Tribute Store

Share Your Memory of
Jack
Upload Your Memory View All Memories
Be the first to upload a memory!
Share A Memory
Plant a Tree