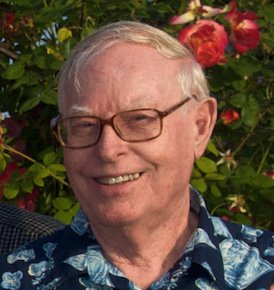 Robert Merrill Waybright June 6, 1927 – November 29, 2020 Robert Merrill Waybright, 93, of Lake Havasu City, passed away on November 29, 2020 in his home. He was born in Redondo Beach, California on June 6, 1927. In his youth, Bob was an accomplished athlete in both football and track. In 1945 he set a school record at Redondo Union High School by jumping 6 feet in the high jump; a school record that would stand for 72 years. After high school he served in the United States Army in the Pacific Theater in the aftermath of World War II. Upon his return he married his beloved Patricia on May 6, 1950. They raised their family of four in Manhattan Beach before moving to Lake Havasu City, Arizona in 1971. Bob worked as a manager in the McCulloch Motors Corporation factory until his retirement in 1988. At home, Bob was a handyman who could seemingly fix anything and was a talented woodworker. He would often team up with his artist wife to make treasured gifts for his children and grandchildren. Bob was a quiet man who preferred Pat to lead conversations, but he never failed to show his friends and family his deep affection for them through his gentle acts of kindness. Bob is preceded in death by his beloved wife, Pat and his daughter Shell Waybright. He is survived by his sons, Doug (JoAnn), Bruce and Matthew, his grandchildren, Josh, Jessica (Mike), Megan (Curt), Melissa, Emily, Doug (Samantha), Catherine, Ivan, Joe, Connor, Jacob and Caleb and his great-grandchildren, Michele, Curtis, Nathan, Michael, Douglas and Nicholas. His memorial services will be held virtually at a future date. Services were entrusted to the care of Lietz Fraze Funeral Home. Thoughts and condolences can be sent to the family at www.lietz-frazefuneralhome.com. To send a free card, go to www.sendoutcards.com/lietzfraze.
To plant a tree in memory of Robert Waybright, please visit Tribute Store
Services for Robert Waybright
There are no events scheduled. You can still show your support by planting a tree in memory of Robert Waybright.
Visit the Tribute Store

Share Your Memory of
Robert
Upload Your Memory View All Memories
Be the first to upload a memory!
Share A Memory
Plant a Tree