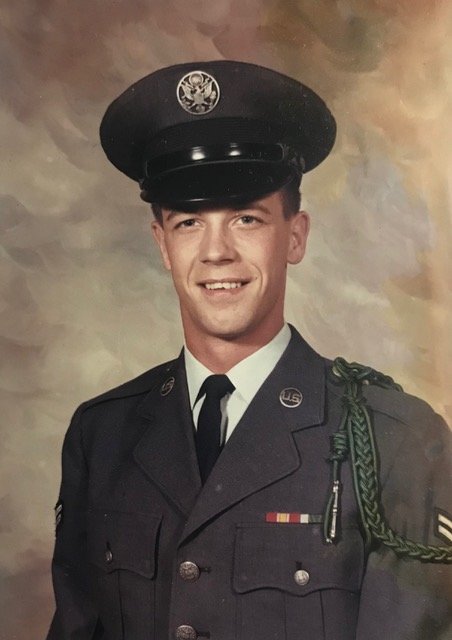 John Reuel Brown, age 74, passed away peacefully on the afternoon of November 20, 2020. A beloved and respected brother, husband, father, grandfather, Air Force Master Sargent and Veteran, he will be dearly missed by his many friends and loved ones. John was born January 8, 1946 in Chicago and raised in Shinnston, WV. He graduated from Shinnston High school in 1964, where he competed and medaled in swimming and diving. He met his wife, Jean, in the Air Force in 1967. They married in 1969 and started a family while stationed in Lakenheath, England in 1971. The family moved to North Carolina, Texas, Nebraska, Greece and back to Nebraska during John’s 22 1/2 year Air Force career. John loved working as a crew member on the RC-135, spending most of his time at Offutt Air Force Base in Omaha, NE. Upon retiring from the Air Force in 1989, John took a job with Lockheed Martin in Fort Meade, MD. In 1994, he and Jean moved to Menifee, CA and he worked at the Ontario, CA plant. Finally settling in Lancaster, CA in 1998, he finished out his career at the Palmdale, CA plant, officially retiring in 2007. One of John’s retirement dreams was to travel the country by RV to visit family and friends. Once Jean retired from her job in 2009, they started their amazing RV adventure. He loved upgrading their trucks and trailers along the way. John was a fun-loving, gregarious and generous man. He had a great sense of humor and an easily recognizable, hearty laugh. He enjoyed hosting barbecues, attending family gatherings, and relaxing with friends. An engaging conversationalist, he loved to discuss world events. Equally kindhearted, he never hesitated to help move a couch, fix a car, or hang a ceiling fan. He was a talented and helpful handyman. One of John’s favorite activities was fishing. He enjoyed no place on Earth more than Milam, TX at Toledo Bend, where he spent time fishing with his brother, Dennis. If John had an opportunity to throw a line in the water, he wanted to take it. John and Jean made many snowbird friends during their travels in the Southwest. Emerald Cove, near Parker, AZ, became a home base. His final stop was in Lake Havasu City, where the couple purchased a home in 2019. John was preceded in death by his father, John Samuel Brown; his mother, Patricia Jane Brown; and brother, Dennis Shoaf Brown. John is survived by his devoted wife of 51 years, Jean (nee Gunderson); their son, Jonathan (Emily), of Los Angeles, CA; daughter, Jill (Richard), of Lancaster, CA; and grandchildren, Alysa, Tiffani, Dade and Eloise. He is also survived by his brothers, Phil Brown (Beth) of McAllen, TX and Pete Brown (Shelia) of Tarpon Springs, FL; and his sisters Julia Stewart of Corona, CA and Beckie Brown of Flagstaff, AZ. Out of an abundance of caution amidst the current pandemic, John’s family will host a virtual gathering to share memories on Saturday, November 28 from 1:00 to 3:00 p.m. MST. Please use the Zoom app and this link to join the event online: https://us02web.zoom.us/j/ 84477535688 The family will share information about an in-person celebration of life with Color Guard at a later date, and they look forward to reuniting with friends and family to honor John’s legacy when it is safe to do so once again. In the meantime, donations can be made in his name to Wounded Warrior Project. The family extends their gratitude to the doctors and nurses at Havasu Regional Medical Center and the staff at Leitz-Fraze Funeral Home & Crematory in Lake Havasu City for their care, compassion and assistance in honoring John’s final wishes.
To send flowers to the family or plant a tree in memory of John Brown, please visit Tribute Store
Saturday
28
November

Share Your Memory of
John
Upload Your Memory View All Memories
Be the first to upload a memory!
Share A Memory
Send Flowers