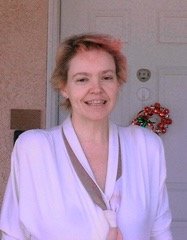 Anne G. Totcky January 27, 1955 – October 12, 2020 A final, poignant moment in a life of them. On October 12, 2020, Anne G. "Angie" Totcky, 38 year resident of Lake Havasu City, AZ, passed from the world at 65 years of age, after a long battle with Multiple Sclerosis. Born Anne Louise Goodspeed in Denver Colorado on January 27, 1955. Soon after to move to Inglewood then Torrance CA. Graduated Torrance HS and then studied Medical Assisting. Met her future Husband in 1980 and they married in 1982, they had no children. Preceded in death by her Father Nathan Lee Goodspeed and her Mother Mary Wray nee: Twogood. An estranged sister and niece haven't been heard from for an age and frankly haven't been missed since. She is survived by her Husband Michael. Angie met her future husband Michael on a blind date to Disneyland. Two years to the very date later they married. A diagnosis of MS about 1994 preceded the long decline to her demise. Angie struggled with Multiple Sclerosis for more than 25years. The last few years took everything she was, yet she persevered with dignity and aplomb. She specifically asked for no funeral or memorial, or service or wake or party. Raise your own hell. (Her words, not mine) Please, no flowers to the house. In lieu of that, send 1(one) single yellow rose to: ///////////////////////////// The Ladies and Gentlemen of The Polodori House : One by each --In Memory of Angie Totcky-- ///////////////////////////// 1970 Bahama Ave, Lake Havasu City, AZ 86403 Donations of more personal note may be sent to your LOCAL MS charity or a LOCAL non-profit Hospice. Services were entrusted to the care of Lietz-Fraze Funeral Home. Thoughts and condolences can be sent to the family at www.lietz-frazefuneralhome.com.
To plant a tree in memory of Anne Totcky, please visit Tribute Store
Services for Anne Totcky
There are no events scheduled. You can still show your support by planting a tree in memory of Anne Totcky.
Visit the Tribute Store