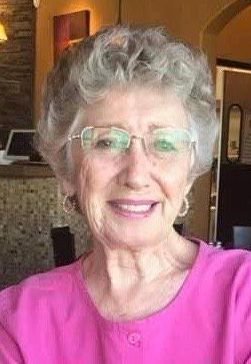 Barbara Jean Webb Baker, 75, passed away peacefully at her home on September 11, 2020 in Lake Havasu City, Arizona with her son by her side. Barbara was born on July 9th, 1945 in Joliet, IL. She was one of ten children born to Clarence and Pauline Webb. After years apart, she was the magnetic force that reunited her siblings. Prior to living the past 20 years in Lake Havasu City Arizona, she resided for many years in La Habra California, Palm Springs California, Nevada Missouri, and Plainfield Illinois. Her north star was family -- nothing brought her more joy than being a wife, mom, and most of all, a grandmother and great-grandmother. Family, friends, neighbors, and strangers alike knew her warmth and generosity. Always leaning into her Faith, Barbara could see the good in any situation. Her positive attitude radiated through her bright, contagious smile. She was a nurturing individual, never shying away from the opportunity to help others. This led her to fulfill her dream of becoming a nurse in her early thirties. She was committed to ensuring people felt cared for, honoring this until the very end. She is survived by her only son, Philip M. Nugent and his wife, Pamela, her seven grandchildren (Corey, Austin, Kacie, Savannah, Gavin, Dalton, and Brody), and her three great-grandchildren (Adaline, Paisley, and Blythe Barbara-Hope). Other survivors include one furry, four-legged best friend (Duke), her sisters (Ada and Jane), her brothers (Gene, Henry, Herman, and Jim), and many nieces and nephews. She was preceded in death by her husband, Keith Gordon Baker Jr., her father, Clarence E. Webb, her mother, Pauline Frederick Jourdan, and her brothers (Bobby, Don, and Melvin Webb). Although her family will miss her, they find peace in knowing after 4 years apart, she and her husband, Keith are happily reunited. In lieu of flowers, the family requests that donations be made in Barbara’s honor to Lake Havasu Baptist Church. Services were entrusted to the care of Lietz-Fraze Funeral Home. Thoughts and condolences can be sent to the family at www.lietz-frazefuneralhome.com.
To plant a tree in memory of Barbara Baker, please visit Tribute Store
Services for Barbara Baker
There are no events scheduled. You can still show your support by planting a tree in memory of Barbara Baker.
Visit the Tribute Store