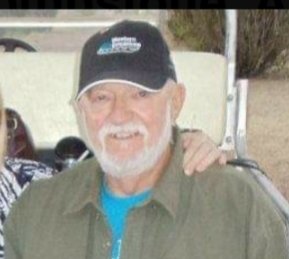 William Boyd McMillan August 19, 1938 – June 12, 2020 William Boyd McMillan passed away June 12, 2020 at the age of eighty-one of leukemia and heart failure. He was born in Sycamore, Dekalb County, Illinois on August 19, 1938 to William Harland McMillan and Florence Tresa Draskowski McMillan but was raised in a Catholic orphanage from two years old to a teenager and was proud of how he was raised by the Catholic Church. Bill and his wife, Helga, having been together since 1988, were wed in Tombstone, Arizona in the fall of 1992. They lived in Escondido, California from 1988 to 1997 prior to establishing permanent residency here in Lake Havasu City. Bill devoted thirty years to Western Emulsions, Inc in Tucson, Arizona. Originally, he worked as a truck driver all across the country and then on road construction spreading oil and then as an area manager for sales of emulsions in Arizona and California. He retired in 2017. Bill enjoyed RV camping, off-roading and traveling. He loved to tell jokes and stories of his past. He was a member of the Lake Havasu Sportsman Club and loved target shooting. Every year during Heldorado Days in Tombstone, Arizona, he and Helga would celebrate their wedding anniversary. He was a life member of the NRA. He was a founder of the Whittington Center in Raton, New Mexico. He also was a member of the Eagles, Elks and Moose here locally. William was a loving and kind soul and is survived by his wife of thirty two years, Helga McMillan; his three sons, Daniel McMillan, David McMillan and Michael McMillan, as well as one grandson, David McMillan Jr.. Services were entrusted to the care of Lietz-Fraze Funeral Home. Thoughts and condolences can be sent to the family at www.lietz-frazefuneralhome.com.
To plant a tree in memory of Bill McMillan, please visit Tribute Store
Services for Bill McMillan
There are no events scheduled. You can still show your support by planting a tree in memory of Bill McMillan.
Visit the Tribute Store