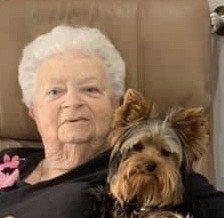 Billie June Smith Billie Smith born on July 23, 1931 in Lawton, OK went to live with her Lord and Savior after a long battle with cancer on Easter Sunday at 2:20 pm. She was surrounded by her children, Judy Jordan (Howard) and Paula Loomis (Neil) of Lake Havasu, Warren Smith (Joan) of Flagstaff and Ron Smith (Tammy) of Glendale, AZ and her 3 dogs, Walter, Randy and Taylor, along with many other family members. Her husband of 63 years Stanley Smith proceeded her in death. Billie and Stanley married in 1945 in Lawton, OK. In 1947 they moved to Flagstaff, AZ where they raised their children. Billie owned and operated Billie’s Pet and Hobby shop for 40 years. Stanley and Billie retired to Topock, AZ where they built their dream home on the Colorado River. The river home in Topock was the frequent gathering place for all family members. Living in Lake Havasu next door to her daughters created an even closer relationship. They would share coffee in the morning, go to church at First Baptist Church, enjoy meals together and shop til’ they dropped. The marriages of her daughters and sons, resulted in the growth of the family: Judy: David, Stanley (Molly) Matthew (Melissa), and James (Brook); Warren: Patti (Todd), Toad (Julie), and Christy (Kelly); Paula: Robert (Tonya), Michael (Char) and Tammi (Jesse); Ron: Ronny, Shane (Heather), Casey (Sydney), and Lynndy. Billie also had 43 great grandchild, 19 great great grandchildren. Billie was loved beyond measure and will be missed by all who knew her. In honor of Billie Smith donations may be made to First Baptist Church 1535 El Camino Dr, Lake Havasu, AZ 86403 A celebration of life will be held at a later date. Services were entrusted to the care of Lietz-Fraze Funeral Home. Thoughts and condolences can be sent to the family at www.lietz-frazefuneralhome.com. To send a free card go to www.sendoutcards.com/lietzfraze.
To plant a tree in memory of Billie Smith, please visit Tribute Store
Services for Billie Smith
There are no events scheduled. You can still show your support by planting a tree in memory of Billie Smith.
Visit the Tribute Store