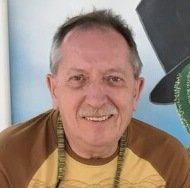 Wolfgang Anthony Rohm November 8, 1950 – February 11, 2020 Wolfgang Anthony Rohm of Lake Havasu City, Arizona, formerly from Elizabeth, Illinois, passed away February 11, 2020. Wolf was born November 8, 1950, in Skopje, Yugoslavia to Karl and Maria Rohm. He became a United States Citizen January, 1975. He served in the United States Army. Wolf met the love of his life Jan in Chicago, Illinois. They were married in Chicago, May 26, 1990. Wolf and Jan have called Lake Havasu City, Arizona their home for the last seventeen months. After retiring from the City of Chicago, they moved to Elizabeth, Illinois where he worked for River Ridge School in Hanover, Illinois. He was a life member of the V.V.A. Chapter 928 of Northwest Illinois. Airplanes were Wolf’s passion. He leaves behind his wife Jan and his very special friend Tina, his little Chihuahua that he was very fond of. Wolf is preceded in death by his parents; Karl and Maria Rohm and his sister; Joanne Schmitt. A Celebration of Life for Wolf will be held at a later date. Services were entrusted to the care of Lietz-Fraze Funeral Home. Thoughts and condolences can be sent to the family at www.lietz-frazefuneralhome.com. To send a free card go to www.sendoutcards.com/lietzfraze.
To plant a tree in memory of Wolfgang Rohm, please visit Tribute Store
Services for Wolfgang Rohm
There are no events scheduled. You can still show your support by planting a tree in memory of Wolfgang Rohm.
Visit the Tribute Store

Share Your Memory of
Wolfgang
Upload Your Memory View All Memories
Be the first to upload a memory!
Share A Memory
Plant a Tree