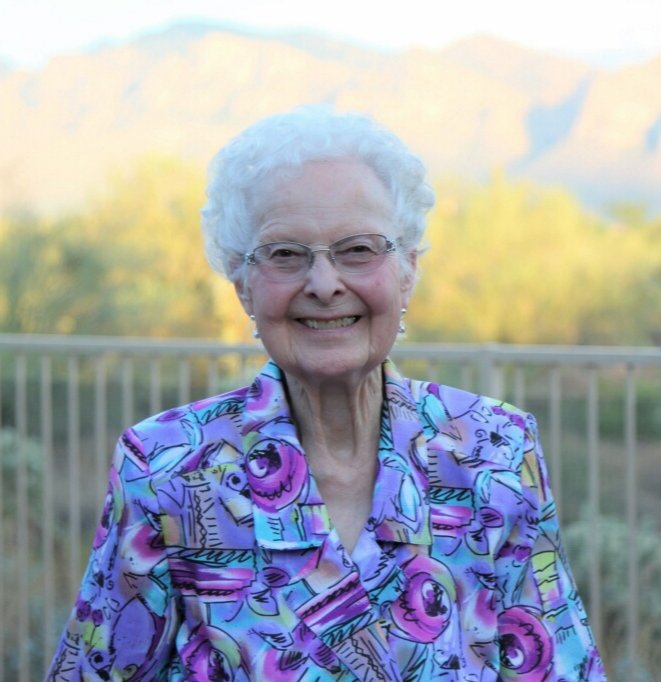 Mary Delma Hansen, 94, entered her Lord’s presence on January 7, 2020. Born to Clarence and May Williams, she grew up in southwest Iowa. She married Einar Hansen and the young family moved to Humboldt, IA. There she was introduced to the life-changing message of salvation through faith in Jesus Christ. She gave her life to him, and grew in his grace and reflected his goodness until her death. Mary Delma loved her family deeply and was disciplined in praying for them daily. She was gracious, kind, and caring. She was a baker, an avid walker, and a letter-writer. She was hospitable and giving. The joy of the Lord was visible in her smile, and she had a Bible verse to share with everyone she met. Mary Delma was a dedicated student of the Bible, teaching home Bible studies for over 50 years. She told everyone Jesus would change their life if they would simply believe. She shared Jesus while selling Avon, taking neighborhood children to Sunday School, and volunteering at Oak Hill Baptist Church. After relocating to Lake Havasu in 1987, she served God on into her 90’s at Lake Havasu Baptist, Gideon’s, Christian Women’s Club, and counseling young women at Pregnancy Care. She was preceded in death by her parents and her husband, Einar (1997). She is survived by her children, Linda (Tim) Johnson of Tucson, Curt (Kit) Hansen of Chicago; grandchildren Brandon (Sarah) Johnson, Melanie (Devin) Kim, Kailey Hansen and Corrin Hansen; six great-grandchildren; brother Darrell (Helen) Williams; nieces and nephews. She will be missed by a host of friends locally and by missionaries worldwide with whom she corresponded—all who saw Jesus in her. A service will be held at Lake Havasu Baptist Church, 2101 Palo Verde N, Lake Havasu City, AZ at 10:00 AM on Tuesday, January 21, with burial immediately after at Lake Havasu Memorial Gardens. Lunch will follow at the church. Memorials may be directed to Gideon’s International, Lake Havasu Camp, Box 284, Lake Havasu City, AZ, 86405. Services were entrusted to the care of Lietz-Fraze Funeral Home. Thoughts and condolences can be sent to the family at www.lietz-frazefuneralhome.com. To send a free card go to www.sendoutcards.com/lietzfraze.
To plant a tree in memory of Mary Hansen, please visit Tribute Store
Services for Mary Hansen
There are no events scheduled. You can still show your support by planting a tree in memory of Mary Hansen.
Visit the Tribute Store