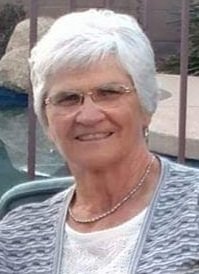 Marjorie Jane Rohn (Schmiess) of Lake Havasu City, AZ passed away on October 29, 2019 with her family by her side.

Marge was born May 26, 1943 in Langdon, ND to David and Jennie Schmiess.  She graduated high school in Alsen, ND as valedictorian of her class.  She received a BA degree in Math from Jamestown College in 1965.

She was united in marriage to Robert Rohn, Sr. on November 19, 1965 in Alsen, ND and they were about to celebrate their 54th anniversary.  Together they served in the pastoral ministry for over 40 years and spent the last 16 years serving at Southwest Baptist Church in Lake Havasu City.  She was the perfect godly pastor’s wife in that she did things so efficiently and enabled Bob to focus on what he needed to do as a pastor.

She was a high school math teacher for over 50 years and was greatly loved by her students.  During that time, she also coached a number of volleyball and basketball teams.  As teacher and coach, she had an amazing impact on so many young lives.

Marge was passionate about her family and was an amazing wife, mother, and grandmother.  She was a great example of love, forgiveness, unwavering faith in God, humor, selflessness, inspiration, encouragement, benevolence, faithfulness, and so much more.

She loved to golf in her “spare time” and was a member at the Lake Havasu Golf Club.  She was very involved in the Women’s Golf League as the co-captain of the Havasu Cup and the treasurer and rules chairman of the East Course Ladies.

One of her greatest passions was the missions ministry through her church.  Not only did she give financially, she also prayed daily for those the church supported.  Because of her love for missions, if you would like to make a donation in her name, you can give to Southwest Baptist Church – Missions.

A memorial service will be held at Lietz-Fraze Funeral Home on November 16 at 11:00 a.m. in Lake Havasu City, AZ.