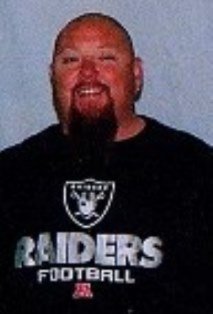 Tim moved to Lake Havasu City, Arizona in 1997 for a better life. He worked for the City of Lake Havasu for over 15 years and was proud of the projects and accomplishments he achieved. He loved going to the shooting range, coaching his kids' sports, barbecuing a great meal, hanging with friends and family, and he was a die-hard Raider fan for life! His greatest pride and joy were his two children, Alex and Amanda. Nothing mattered more to him than they did.

Timothy is preceded in death by his father, Timothy Edward Baker, Sr.

A Funeral Service will be held on Friday, October 25, 2019 at 10:30am at Lietz-Fraze Funeral Home with a Graveside Service to follow at Lake Havasu Memorial Gardens.

Services were entrusted to the care of Lietz Fraze-Funeral Home.  Thoughts and condolences can be sent to the Baker family at www.lietz-frazefuneralhome.com.

Share Your Memory of
Timothy
Upload Your Memory View All Memories
Be the first to upload a memory!
Share A Memory
Plant a Tree