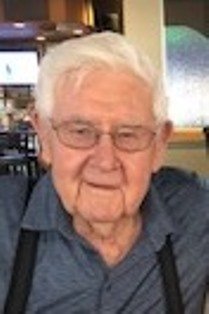 Roy was raised in North Hollywood and attended North Hollywood High School. After graduation he enlisted in the United States Army, where he proudly served his Country in World War II.  Roy married his beautiful wife, Helen, on April 10, 1948 in Glendale, California.  They made North Hollywood, California their home until they moved to Riverside, California, where they proceeded to live for twenty years.  Roy and Helen then decided to pack things up and head for Lake Havasu City, Arizona, where they would call home for the last nine years.

Roy worked at Lilton Data System and was also self-employed in the construction trade.  He enjoyed making wood pens and was an excellent craftsman with wood and metal.  He was a member of several wood clubs and a Master Mason of Lodge #618 for 48 years.  His greatest love, however, was spending time with his family and friends.

He is preceded in death by his parents, Tom and Katherine Mandry and brother, Walter Mandry.

Services were entrusted to the care of Lietz-Fraze Funeral Home.  Thoughts and condolences can be sent to the family at www.lietz-frazefuneralhome.com.  To send a free card, go to www.sendoutcards.com/lietzfraze.

To send flowers to the family of Roy Mandry, please visit Tribute Store

Share Your Memory of
Roy
Upload Your Memory View All Memories
Be the first to upload a memory!
Share A Memory
Send Flowers