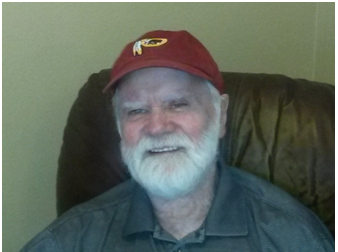 Tom was born in Winston-Salem, North Carolina to Brosia andBiner Caudill on May 13, 1929. Tom married Ann Shuping and they went on to have seven children together from 1950 to 1964.

Tom, along with his family settled in Jacksonville, Florida and later relocated to the Northern Virginia area in 1964. Tom’s career flourished in the mortgage banking industry in the Washington, DC metropolitan area. He was voted “Mr. Beam” by his coworkers as “Best Employer at Pennamco” and wasselected by the Mortgage Banking Association to assist in the development of the Department of Housing and Urban Development’s guide for servicing insured mortgages.

Tom was a loyal and supportive Washington Redskins fan and continued to support the team until his passing. There weren’t many days you could catch him without his team’s ball cap on. Somewhere up there we can hear him singing our fight song “Hail to the Redskins”. It was this same dedication and commitment that he instilled in his children and portrayed to all of us in his everyday actions.

Later in life, Tom became an avid runner and retired to Columbia, Maryland in 1983. You could almost always find him running 5 miles per day and then after his run bike riding for another 20 miles at Centennial Park Lake in Columbia.  Tom competed in many 5k races and was often the victor within his age group. He was always welcomed by his many friends for these passionsand taught those of us in younger generations how to “keep up”.

The family will be holding private services in memory of Tom all over the U.S in the coming weeks. Thoughts and condolences can be sent to the family at www.lietz-frazefuneralhome.com. Send a free card at www.sendoutcards.com/lietzfraze. In lieu of flowers the family asks that you make a memorial donation in Tom’s honor to the Alzheimer’s  Association at https://act.alz.org.

Share Your Memory of
John
Upload Your Memory View All Memories
Be the first to upload a memory!
Share A Memory
Plant a Tree