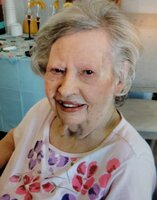 Dorothy passed peacefully at HRMC with her Daughter by her side. Dorothy was born to John and Mary Brayer in Marshfield WI. Being the baby of 9 children on a farm she was always reminded by her siblings that she was the only baby to be born with a Dr present. Her older sister Peggy who was 8 years old shared the same birthday. When she asked for a Dolly for her birthday little did she know what she would be presented with. She married Joe Baumer in 1951. They later moved from Marshfield to LaCrosse to start their Restaurant business. They were married for 47 years until Joe passed in Feb 1998. In 1964 they ventured west to CA. They were always happy to entertain in their home . Dorothy was quite the cook and loved hosting holiday dinners or even just having family and neighbors over for card games or poker. She also won a few trophies in her bowling league. They retired in Lake Havasu City in 1989. They enjoyed their new found friends here too. Dort enjoyed her trips to the Blue Water Casino where she was very lucky at the Video poker machine. Dorothy was a devoted Mother and Grammy to her girls. The last two and a half years of her life were spent at GEMS Assisted Living. She always enjoyed an outing to Juicys Restaurant for a Morning Glory! She is preceded in death by her Husband Joe, her parents John and Mary Brayer and her eight siblings, Mary, Ralph, John, Joe, Ann, Rose, Peggy and Fran aka Linda. Another sibling Louis who died shortly after birth. She is survived by her Daughters Barbara Bradley of Indio CA, Kathy Jo Baumer of Lake Havasu City and her Grandaughter Erin Bradley of Indio CA. Rest in peace Mom! You are loved and missed!