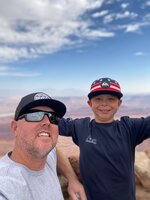 Chancey Esmay Third Generation Pioneer 1981-2022 Chancey Esmay passed away on September 20, 2022, at the age of 41. Chancey was born in Lake Havasu City, AZ, and after graduating from high school in 1999, he went on to work for his father at Esmay Electric. He further advanced his career as a recognized professional, licensed electrical contractor. Chancey lived his life to the fullest and encouraged others to do the same. He enjoyed off-roading, snowboarding, traveling, craft beer, live music, football, baseball, and spending time with his family and friends. Every year, taking part in his Fantasy Football League, No Ma’am, was a top priority of his. Chancey was skilled at obtaining the best seats for the Arizona Diamondbacks, Cardinals games and concerts (something he learned from his father). His greatest joy was the love of his life, Desiree Hensel, and every moment spent as a proud father to his son, Carter. Chancey is survived by his fiancé, Desiree Hensel, son, Carter Esmay, father, Greg Esmay (Nancy Dreier), mother, Debbie Esmay, Desiree’s son, Calvin Hensel, all of Lake Havasu City; sisters, Alicia Esmay, of Tempe, AZ, and Cassie Anderson (James), nephews, Tyler, Aidan and Andy Anderson, all of Las Vegas, NV; grandfather, Robert Gecich, of Lewiston, ID, along with many aunts, uncles, cousins, nephews and friends in Arizona, Nevada, and Texas. He was preceded in death by his grandmother, Laura Gecich, Aunt, Connie Gecich, and grandparents, Neil and Norma Esmay. Chancey’s celebration of life will be held at the London Bridge Resort Convention Center on Saturday, October 29, 2022, at 3:00 pm.