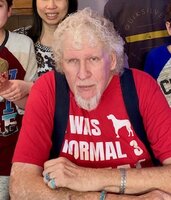 Robert D Keller born January 18, 1945, died at KRMC in Kingman, AZ on August 2, 2022. Robert was born in DeKalb, Illinois. Bob was a cheerful spirit, added humor and warmth wherever he went. He enjoyed cooking, cars, and animals. He will be greatly missed by everyone blessed to know him. He was preceded in death by his parents Edith and Leonard Keller, both brothers Leonard Calvin and Richard Keller. Bob worked at Barber Green then Caterpillar He is survived by his wife of 49 years Forsythia (Sis) a son Micheal Keller and wife Agnes. Two grandson’s Xander and Xavier. Arrangements were placed in the care of Lietz-Fraze Funeral Home and Crematory. Thoughts and condolences may be submitted to the family at www.lietz-frazefuneralhome.com To send a FREE card to the family go to www.sendoutcards/lietzfraze