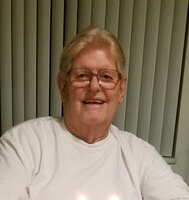 Roger Hamlin Dyer passed away July 8,2022 at the age of 73 after a very long illness. He was born in Borger Texas. He has lived in Lake Havasu for 52 years. His passions were fishing, hunting, golfing, metal detecting and finding 2 classifications of meteorites. He was a signmaker and had his own business, Signcraft, for 18 years. He is survived by his wife Sue. He has 2 daughters, Tabitha Morales of Queen Creek, AZ and Andrea Davis of Chandler, AZ. ; and a step-son, Jamie Jung (Selina)of Gilbert, AZ and his step-daughter Jenny Jordan (Paul)of Gig Harbor, WA. He is also survived by his step-dad, Ed Wasser (Sharon) of Glendale, AZ and his sister, Janet Stevenson (Mike) of Lake Havasu. He has 9 grand-children. He was preceded in death by his mother, Eunice Wasser and grandson Cole Jordan.