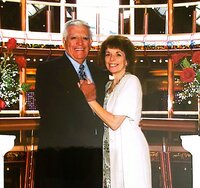 Our dearly beloved husband, father, and grandfather Arthur Ontiveros passed away on Friday May 27th 2022. He was born on January 31st 1936 to Enrique & Erminia (Diaz) in Morenci, Arizona. He married the love of his life Linda, and they spent forty years together in heavenly happiness. Art worked 28 years for Alpha Beta Markets across Southern California and later moved to Lake Havasu City, Arizona where he established Linda’s Italian Foods as a family business with his wife & sons. Art loved his customers and said he would never retire until he had to. He also enjoyed working outside and doing everything from maintain the yard to building walls and patios, plus painting inside and outside the family home. He was a strong and amazing man who stood by his faith and morals, dedicating himself to the Lord and our Blessed Mother by passing on the Faith to his children. He loved praying the Rosary and kept many sacramentals around. He worked hard to provide for his family and was an excellent role model. He was very close to his grandchildren Brooklyn and Paul, together they were inseparable. He is proceeded in death by his parents Enrique and Erminia, son Paul David Ontiveros, and brother Hank Ontiveros. He is survived by his wife Linda, son Eric (Holly) Ontiveros, daughter Denise Leonard, sister-in-law Shirley Sacheli, brother David (Tecla) Ontiveros, and aunt Connie Cochran (102 years old). He was blessed with eleven grandchildren, eight great-grandchildren, two great-great grandchildren, and numerous nieces and nephews whom he loved very much. He will truly be missed by all who knew him.