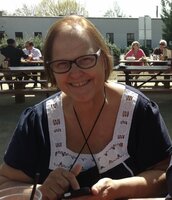 On Monday, Nov. 8, 2021, Jolene "Jo" Grossoehme, loving wife and mother of 3 passed away at the age of 67 years. Jo was born February 9, 1954, to the late Eugene and Myrna Bantz (Meyer). She graduated from Hastings High School with the class of 1972 followed by Bryan Memorial Nursing school in 1975. She spent most of her adult life as a resident of Omaha, Nebraska working as a labor and delivery nurse at Immanuel Hospital prior to retiring in Kingman, Arizona in 2014. She passed away November 8, 2021, at The Joan & Diana Hospice Home in Kingman, Arizona. Jolene had a passion for ceramics. In retirement, she drove 3 hours roundtrip each week to attend her class in Las Vegas. Her creations were shared with family and friends over many years and are sure to become treasured family heirlooms for generations to come. She also thoroughly enjoyed baking and playing cards (particularly Pitch) with friends. Those who were blessed to know her would be quick to tell you that she was among the most selfless, generous, and caring people they have known. Along with her parents, Jolene is preceded in death by her twin sister Janene May. She is survived by her husband, David Grossoehme; children Keith Grossoehme and wife Rebecca, Nicholas Grossoehme and wife Jill, and Janelle Grossoehme; grandchildren Logan Grossoehme, Laurel Grossoehme, and Seth Grossoehme; sister Jackie Griffin; and nieces Bethany Griffin, Shelby Williamson and husband Tim, and Dominique Griffin. Arrangements were placed in the care of Lietz-Fraze Funeral Home and Crematory and Memorials may be sent to the funeral home. Thoughts and condolences may be submitted to the family at www.lietz-frazefuneralhome.com To send a FREE card to the family go to www.sendoutcards/lietzfraze