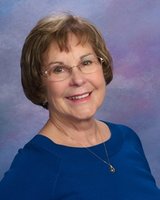 It is with great sadness that the family of Peggy Ann Depuydt announces her passing at home on January third at age 87. Peggy will be remembered as a loving wife, mother, grandmother, a community activist and author. Peggy was born at home on December 14, 1932 in Nahma, Michigan to David and Rose Phalen. She worked for many years as Executive Secretary for American Motors Corporation and retired in 1988. At that time, she and her husband, Richard, a Michigan State Police Sgt., relocated to Lake Havasu City where she became active in the community joining the congregation of Our Lady of the Lake Catholic Church and becoming Chairman of the Lake Havasu Beautification Committee. During her tenure as Chairman, she oversaw the landscaping of the U.S. Post Office and established the Welcome signs on the north and south sides of the city. Time Capsules initiated by Peggy live under the Welcome Signs she established. Her life was fully lived and her roles were many. She was an accomplished organist and served two parishes in Michigan for over twenty years. She owned and operated a successful business, Peggy Dee’s Dress Shop, in Iron River, Michigan for several years before her move to Lake Havasu City. She gave her time to Special Olympics and was a Girl Scout Troop Leader. She was Vice President of the Lake Havasu Republican Women and also Second Vice President of the Arizona Federation of Republican Women. One of Peggy’s greatest joys was writing. As a published author, Peggy wrote six books, both fiction and nonfiction. Her last book, The Closer, was a meticulous reconstruction of a tragic event in Lake Havasu City history. In addition, she wrote multiple interesting and heartwarming essays for the “Your View” column in the Today’s News Herald. She is survived by: Son, Thomas (Amy) Depuydt, Lake Havasu City. Daughters Jody A. Tousignant (Mark) and Richelle D. Gagne (Gary) of Iron River, Michigan and Glenna J. Hale (Alan) of Milan, Michigan, one brother, Michael (Wray) Phalen of Diamond Springs, California, one sister, Rose (Curtis) Beauchamp of Nahma, Michigan and seven grandchildren, two great grandchildren and many nieces and nephews. Upon her passing, Peggy will be rejoined with her husband, Richard J. Depuydt, who passed in 2009, her infant son, Richard Kent Depuydt (d.1953), her father, David Phalen, (d.1970), her mother, Rose Phalen, (d.1995) and brothers, David, Patrick and Clinton Phalen. While Peggy will be deeply missed by her family and friends, she will always be dearly remembered for her energy, intellect and poise but, foremost, for her warmth and laughter. She will be interred in the Baldwin Township Cemetery in Perkins, Michigan next to her husband and infant son. Per her request, there will be no services. Thoughts and condolences may be sent to the family through Lietz-Fraze Funeral Home at www.lietz-frazefuneralhome.com. To send a card go to www.sendoutcards.com/lietzfraze. Memorial gifts may be made to the Lake Havasu City Beautification Committee.