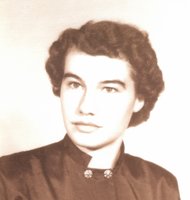 Clara Frances “Fran” (Perrine) Weimer, 87, passed away on September 22, 2019, in Lake Havasu City, Arizona. She was born on April 12, 1932 to Amos and Alice Perrine in Sutton, West Virginia. She graduated high school and moved to Akron, Ohio where she met and married Bill D. Weimer in 1953. They had 2 children, Gayle and Bill.

Life changed and they all moved to Whittier, California. She worked at the Co-op, in Akron and then at Lucky's until retirement, in California. Fran & Bill moved to Pahrump, Nevada and then finally settled in Lake Havasu City, Arizona, in 2002.

Clara is survived by her children; Gayle and Bill, her loving boyfriend of 12 years; Harley T. Cox, 7 grand children, 14 great grandchildren and many friends near and far.

She was preceded in death by her parents; Amos and Alice Perrine, her husband of 53 years; Bill, her brother and sisters and a great grandchild.

A memorial service will be held at a later date.