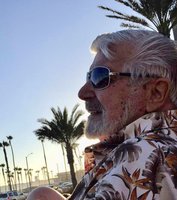 Louis Costa went home to be with the Lord in the early afternoon on September 6th, 2019, in

the loving care of Jasmine Place of Lake Havasu City. He was in the presence of several of

his sons and daughters, praying and saying their final goodbyes. Lou was 85 years young.

Louie was born on June 26th, 1934, to Luigi and Mary Costa in Elizabeth, New Jersey. The

family moved to the Los Angeles area when Lou was a preteenager. After attending Alhambra

High School, Lou snuck into the army at the age of 17 because of his great desire to defend his

country. After serving in the military, he came back to attend trade school that would lead him to

a 40 year career as a union electrician working in the construction industry.

Lou has two daughters from an early marriage, a son and daughter with Millie, his beloved wife

of 35 years, and two sons from Millie’s earlier marriage. The love of his life, Millie, preceded him

these years. His daughters are Linda, Gail and Trina. His sons are Tony, Jim and Dean. He is

and made Lake Havasu a favorite destination since the 70’s. He loved Havasu so much that he

and Millie eventually made Lake Havasu City their retirement community. They loved the

people, the lake, the desert, the warm climate and could often be seen riding off into another

A viewing will be held from 5-7pm Sunday, September 15th, 2019 at Lietz-Fraze Funeral Home in Lake Havasu City, Arizona.

Interment at Forest Lawn Cemetery in Covina will take place at 11:00 am on Wednesday,